"The time has come," the Walrus said "To talk of many things: Of shoes—and ships—and sealing-wax— And cabbages—and kings— And why the sea is boiling hot— And whether pigs have wings." -Lewis Carroll

Today was our first (partial) family race -- the Brookfield Zoo RunRun 5K and 3K. We had signed up for the 3K fun run/walk, which was more in the range of Alex's and Anna's current training. With the forecast for rain and the downpours on the way to the race, we arrived at the zoo expecting to be soggy before the end, but the rain decided to fall everywhere else instead.

Parking involved negotiating an obstacle course of other cars, dead raccoons, suicidal volunteers, and a policeman. Once in the zoo, the start area looked like a cranberry field that had been harvested too early, since all the cranberries were green (the race shirt color). There didn't seem to be an obvious path between us and the packet pickup at the other end of this area through the sea of people. Fortunately, a daddy with a stroller provided icebreaking services and we made it successfully to the first line of the day. Quite a few minutes later, we reached a friendly volunteer at the packet pickup table who informed us that we need to go back to the cranberry field and find our bib numbers. Hm... We finally found the postage-sized board with the names and numbers, where with some careful elbowing I managed to see our information. Back to the packet line we went, but by then we were pros, so we managed to get into one of its shorter tributaries. 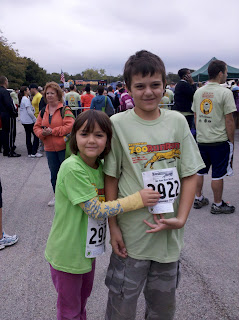 With whole minutes to spare, we got our packets and proceeded to find a spot to attach our bibs. Of course, we had no pins. Fortunately, Alex didn't mind sneaking back through the line (third time is a charm!) to get us some from the packet people. As we finished transforming from ordinary walruses into racing walruses, the excitement around us grew and people started packing themselves even more tightly into the start area. While this freed lots of room where we were standing, it presented a different problem -- there was a tightly compressed river of people between us and the porta-potties, and of course, Alex had to go.

Going straight trough the ready-to-run-at-any-moment runners was an interesting and massaging experience. We enjoyed the unsurprisingly deserted porta-potties (no wonder, given the human-filled moat guarding them). Then we thought we'd watch the 5K race start (our 3K was supposed to start 20 minutes later). The air horn sounded, and the runner river started flowing faster and faster.

Some other 3K-ers like us decided at this point to start merging into the runner stream, and so we merrily followed them in, first walking and finally gently running through the start line. Off to a great start, we thought.

The first mile was pleasant, and I had to reign Alex and Anna in because they could go much faster. We approached the first mile marker, and I told them, "Halfway there!". All was going wonderfully, we were passing lots of people and feeling great. After a while, we took some mini walking breaks (a few steps) for certain young walruses to catch their breaths. A chipmunk nearly met a squishy end as we were entering the Bear Wilderness. All the while, I looked for any signs mentioning a 3K. As mile 2 drew nearer, dark suspicions arose that we may be in fact running a 5K. Seeing mile 2 confirmed our worries that we were, indeed, lost. In a race. In the zoo, where we knew every tree and corner.

Of only eight total professional photographs of this event involving over 3000 people, we, of course, were in one of them. Well, I guess mostly Alex, since I'm looking down and only half of one of Anna's legs is visible. But still... 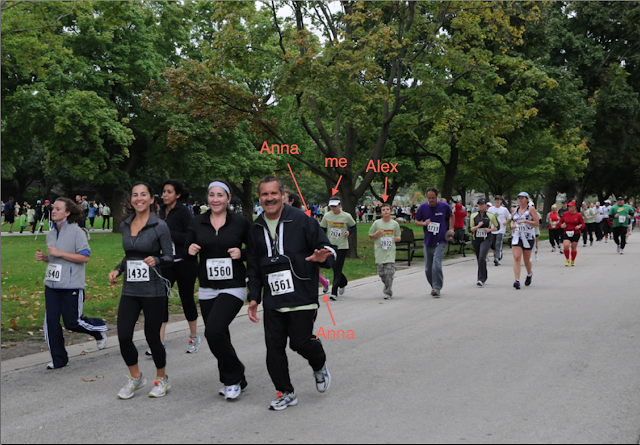 We didn't let this little unexpected 66% increase in the distance phase us, and proceeded to (mostly) run the rest of our race. Our time: 41:21. Not bad for a first! I didn't time it exactly, but about 5 minutes after the finish, Alex and Anna declared that they want to sign up for another one! 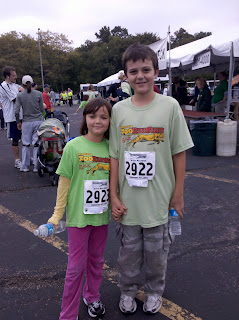 From a photographical point of view, I noticed that Alex and Anna became significantly easier to shoot after the race. Possibly a previously unknown benefit of endorphins? Parents should let their kids run three miles if they want easy, hassle-free pictures.

At the finish, we let Alex enjoy the port-a-potties yet again, while Anna and I got various goodies, including metal water bottles and cool looking pedometers. And of course three more shopping bags (they came with our packets) because one can never have too many reusable shopping bags. And safety pins.

After Alex rejoined us, we slowly headed back to the car. Quite a few walkers were still arriving. Our car was another 5K away (well, perhaps a bit less, but about as far as it can get and still be on zoo property). Most amazing, as we were driving past the race finish area, we saw the last two walkers, going at a rather relaxed pace. This was about 1.5 hours after the start! By then the finish area had been disassembled, and we wondered how they'd know that they've really finished.

It was a great day, and the Walruses will surely run again! 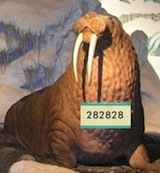